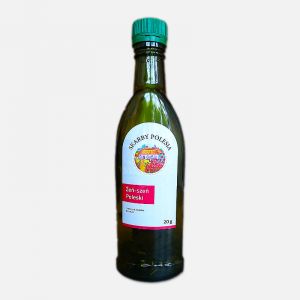 Ginseng from Polesie is a traditional medicinal tincture, made and used in Polesie for centuries. The product does not contain alcohol, which must be added on its own! The plants were harvested manually in Polesia.

Ginseng from Polesie has its Latin name taken from the word "potens", meaning "powerful", which emphasizes the medicinal properties of the plant. Tincture, made on the basis of its rhizomes, acts anti-inflammatory and anti-diarrhea - helps in indigestion, food poisoning, diarrhea, stomach diseases and hemorrhoids. Used as a mouthwash to relieve inflammation of the gums, tonsils and throat.

Application: To prepare the tincture 20 grams of root should be poured into full vodka and set aside for a month. Take 20 ml 2 times daily or prophylactically 20 ml once a day. For food.

You can also rinse your throat, brushing tonsils and gums. Tinctures should not be used by a pregnant woman, should not be overdosed or used for more than a few weeks without interruption.

✖
I cookie ci aiutano a fornire i nostri servizi. Utilizzando tali servizi, accetti l'utilizzo dei cookie da parte nostra.Cookies help us deliver our services. By using our services, you agree to our use of cookies. Maggiori informazioniRead more